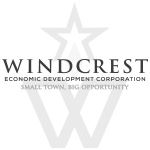 The Historical Marker pictured above was refurbished and rededicated in 2019. The text on the marker reads "The land which comprises the City of Windcrest was once part of several farms. M.A. Winn, Jr., the founder and principal developer, purchased the first seventy-eight acres of land in 1953, and constructed the first home in 1955. As he purchased additional land, the City was expanded to its present size of approximately two square miles. The City has been planned and developed in accordance with a comprehensive development plan resulting in a community of beauty and charm. Windcrest is known area wide for its annual Christmas Light Up of homes which started in 1960, and thousands of people drive through the City each Christmas to view the spectacle. Windcrest was incorporated as a city on September 18, 1959, and won state wide fame when it was announced as the Texas city with the largest percentage of increase in population from 1960 to 1970 by the Census Bureau. In 1974, the City obtained 16 acres of land to be developed into a city recreational area. To commemorate its fifteenth anniversary as a city, this marker and oak tree were placed this 20th day of December, 1974 A.D.

For additional history visit the Story of Windcrest page.